ACSOLCalifornia
The City of Mission Viejo has agreed not to enforce the presence restrictions in an ordinance it adopted in January 2012.  The agreement is now in effect and will continue to remain in effect unless the State Supreme Court makes an adverse ruling in a related case.
According to a letter from Mayor Trish Kelley dated February 21, 2014 (below), the Chief of Police Services and the City Attorney recommended to the City Council a stay of enforcement for the city’s ordinance.  The presence restrictions in that ordinance that will not be enforced include all city parks and recreational areas.
“This is a great victory for more than 105,000 registered citizens in the state of California,” stated California RSOL president Janice Bellucci.  “No longer will those citizens be denied the use of parks and recreational areas within the City of Mission Viejo.”
Mission Viejo is one of a growing number of cities within Orange County to either agree not to enforce its presence restrictions or to repeal its presence restrictions.  Some cities, such as Lake Forest, repealed its ordinance after a lawsuit was filed in federal district court.  Other cities either repealed their ordinances or issued a stay of enforcement after receipt of a letter from California RSOL dated January 20, 2014.  In that letter, California RSOL notified the cities of two recent decisions by the Court of Appeal that determined such restrictions to be preempted by state law.   Also in that letter, California RSOL requested that cities repeal their ordinances within 60 days and warned that if the ordinances were not repealed, the cities could be challenged in court.
Review by the California Supreme Court of the California Court of Appeals decisions to which the CA RSOL referred in its letter has been requested by the Orange County District Attorney.  The Supreme Court is not expected to grant review of those decisions.
### 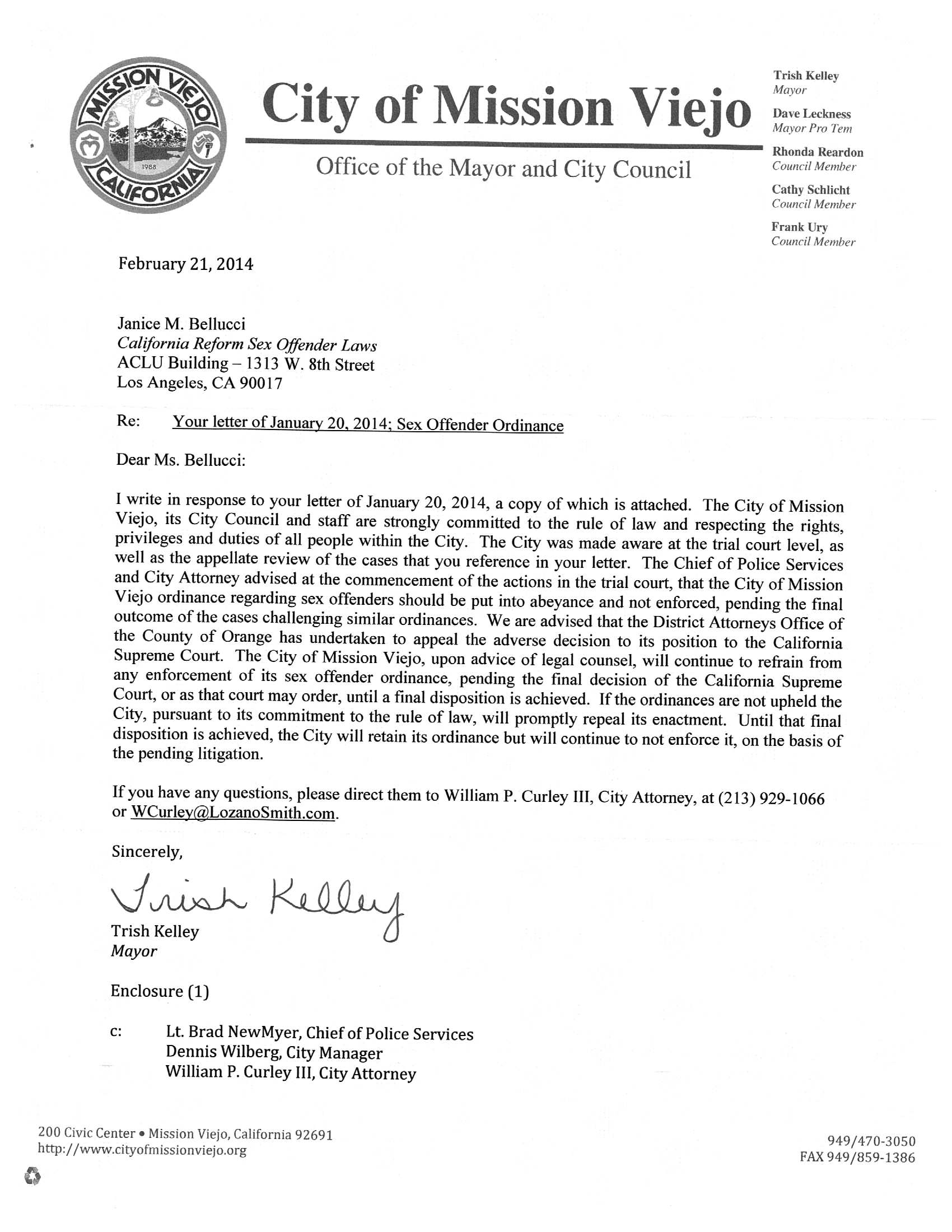 Action Alert for CA: Support for the release of Mr. Badger to San Diego County by April 9

March 23, 2021
We welcome a lively discussion with all view points - keeping in mind...
ACSOL, including but not limited to its board members and agents, does not provide legal advice on this website.  In addition, ACSOL warns that those who provide comments on this website may or may not be legal professionals on whose advice one can reasonably rely.
13 Comments
Inline Feedbacks
View all comments
noname

Any word about San Diego area????

No word yet. Stay tuned.

This is nice; Does this mean that presence restriction laws in San Bernardino County are suspended as well? I wonder if it would be a good idea for someone to keep tabs on all crimes committed in parks in California while waiting for the outcome of the review. That information can show just how unnecessary these kinds of laws are and how they have no impact on crime reduction.

Thank you to Janice and the CA RSOL crew.

Where do we stand with Jessica’s Law and residency restrictions in Riverside County (specifically Corona).

There is no change yet in the laws you mentioned.

Thank you Janice. Another victory. None of these laws make any sense, and if some realize this, I am sure other will follow suit.

This may be a long shot, but it’s something to think about. Maybe Janice could weigh in on this? QUESTION: Could cities that do this instead of repeal the law be “pulling a fast one”? Meaning, could they “gather evidence” of registered citizens being present at these locations via CCTV video of parks, license plate scanning, etc. and just put this evidence on the shelf. Then, if these ordinances are upheld by the Supreme Court, could they then go out and arrest everyone against whom they have said evidence? In other words, they say they will not enforce it NOW.… Read more »

Good question. The whole concept of law enforcement to arbitrarily decide not to enforce a criminal law is wrong. The law is the law, is it not.

No need to be paranoid. We have a written agreement from the City and that could be used as evidence in court if they choose to violate it.

Is there way or a possibility to file a similar lawsuit against the state regarding residency restrictions? (LA County for me)

To subscribe to our Email Alerts simply add your email below. A confirmation email will be sent to you!
ACSOL Twitter Signup
Read all recent comments (Text)
Leave a comment on this April's general comments page